Dominion completed a number of overseas projects in the South Pacific in the early 1990s. These projects were wide ranging, from upgrading road infrastructure and bridges in Samoa to constructing the Australian High Commission Housing Compound in Apia. Projects undertaken by Dominion:

PROJECT: Bridge & Culvert Construction
VALUE: $900,000
CLIENT: Western Samoan Government
CONSTRUCTION PERIOD: 1991 – 1994
In Samoa, Dominion were involved in the upgrading of a series of badly deteriorating bridges and water channelling structures which proved very challenging. Works undertaken varied considerably, from the construction of single-span bridges (including head and wing walls and piling) to strengthening and specialist remedial work to existing structures. In addition a series of new in-situ culvert structures were constructed at various locations on the Island of Upolu in the Samoa Group. Here versatility was a must as construction methods had to be adapted to allow for different areas and water characteristics. In all cases the use of our own equipment, freighted from New Zealand, and local resources were carefully managed to achieve the required results. 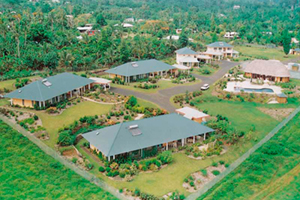 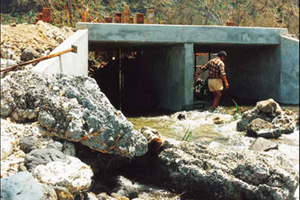