This project to repair, strengthen and restore the former All Seasons Hotel (Hotel So) commenced in March 2014, with stage one – the first four floors – opening mid-April 2015 and the remainder of the hotel by the end of June 2105. It is one of the largest seismic upgrade and refurbishment projects undertaken in Christchurch to date.

The structure required extensive strengthening, including detailed foundation work to become an A grade building with over 80% of NBS by completion. This incorporated new elements of foundations, shear walls, concrete beams and structural steel all within the existing building. The building services were reinstated and upgraded to meet code changes as necessary and a full interior refurbishment was undertaken utilising existing components and joinery.

Whilst not a heritage building, it was important for the construction team to work on retaining or restoring as much as possible both to follow Dominion’s sustainability principles but also provide cost efficiencies. This has given a strong awareness of a controlled style of demolition and construction to ensure protection is the first element in all that is undertaken, especially in maintaining and repairing services.

With regard to interiors the hotel’s top two floors were extensively water damaged after falling debris from the neighbouring Hotel Grand Chancellor created holes in the roof. As such, more time was taken to return these floors to occupancy quality and the opportunity taken to upgrade some of the rooms into executive suites.

The existing design was given a fresh approach and new colours and carpet throughout. The technology in-room was upgraded to include smart TV’s and IP TV. The ground floor bar, restaurant and reception was completely refurbished from the ground up to create a new, funky, modern space. Numerous recycled materials from demolished buildings were incorporated throughout the design. This not only supported sustainability, but also gave Dominion the opportunity to incorporate some of the city back into the CBD. On the western façade, which was extensively damaged by the demolition of the Hotel Grand Chancellor, 54 new windows were installed, all of which were double glazed. A total of 17 new fire windows were also included on the eastern side. These were double glazed for thermal and acoustic performance.

There has been a full review of the building services undertaken, and remedial works completed to bring the building’s HVAC services up to code. This included the installation of new Air Handling plant and chillers which were damaged in the earthquake. The central boiler plant was also damaged, so these have both been upgraded and returned to service. Due to the extensive strengthening works undertaken below ground, drainage had to be rerouted along with a relocation of the HV cable serving the building. The services works have formed part of the overall refurbishment programme and have had to be carefully planned to integrate with the completion of the hotel works in both the public areas and accommodation floors. The building had an existing type 7 fire system which included sprinklers for the entire building and heat protection throughout.

As the upgrades occurred, every effort was made to select energy efficient fittings to lower the energy levels used during operation. This project has provided not only lessons in physical construction but the challenges of working in the heart of the city where traffic access changes regularly placing consistent pressure on programming constraints. This was the second project Dominion had undertaken to meet the new Seismic Strengthening standards. Seismic strengthening is not a ‘one method fits all’ process, but the experience gained on each project builds better knowledge and understanding of how best practices can be applied to meet the needs of each individual project. As such, programming can face additional pressure due to circumstances that cannot be known until investigation works start, particularly in foundation work. Dominion’s experience enables an understanding of the elements of risk, how to factor this within the programming and the innovation that may be required to counter unforeseen discoveries. 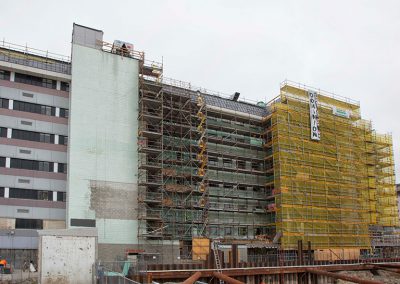 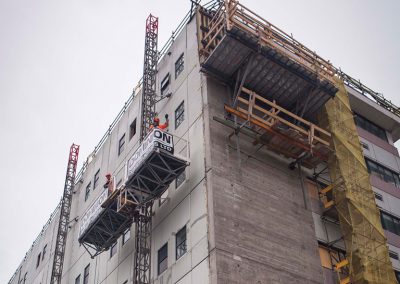 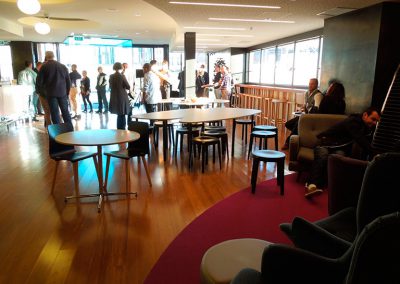 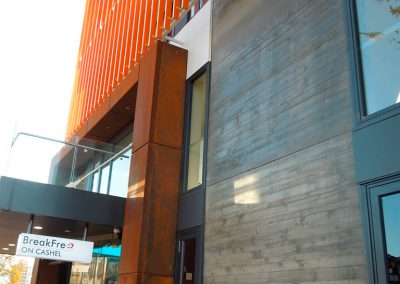 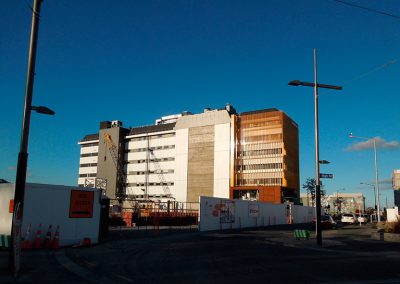